The “elephant in the room” is never one that you invite in – but Iris inadvertently does!

Living Room Coffin definitely one-ups the elephant. What exactly can you do – or shouldn’t do – in this situation? In this 2018 comedy-drama, the elephant is a coffin that police dispatcher-911 operator Iris Hawthorn didn’t order, gets delivered to her front door – and it’s put right on display in her living room. She needed a coffee table, true, yet she wonders if it’s a goodbye present from a former boyfriend. Or maybe someone’s playing a cruel joke? The delivery men can’t take it back, so she’s stuck with it.

This is the dilemma for Iris, which starts her on the journey to trace the bizarre gift to its sender. She doesn’t find the answers all in one place, but picks up insight and a few bread crumbs while stopping in at a haunted house, a funeral parlour, and a church. Along the way, we wonder if fate or karma is at work. Undoubtedly both are, as she has a sick yet feisty granny. 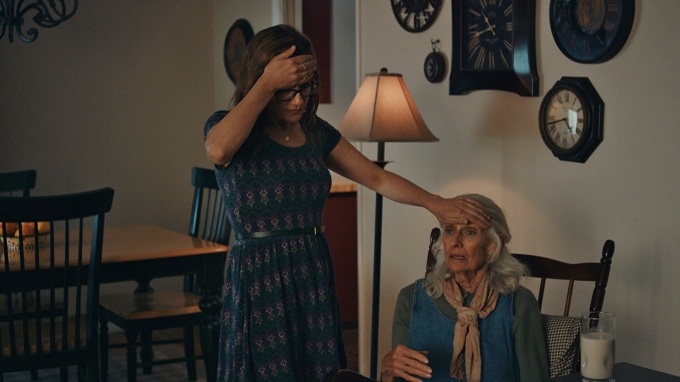 Other “gifts” associated with a coffin begin to arrive. Confiding in friend Patricia who works at the same police job, Iris only ends up with more questions. To further complicate the search, she’s also distracted by missing romance in her mundane existence, and then her former boyfriend reappears. Otherwise, the most exciting thing in her life is comparing with Patricia who has the more outrageous day on the job. Iris definitely wins out, now that she has the uninvited guest on a plexiglass stand dominating her living room. 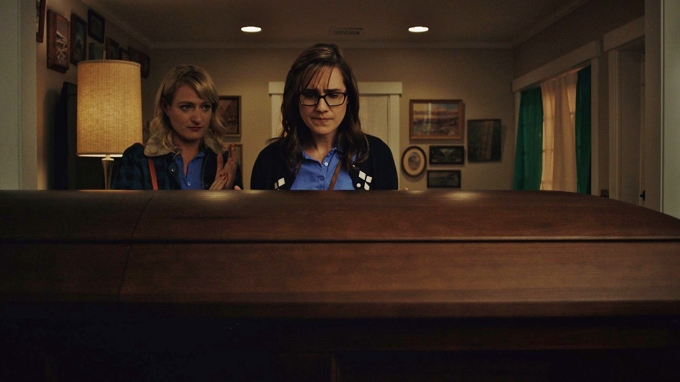 Iris, wonderfully played by actress-filmmaker Jennifer Prediger, aims to solve the origin mystery, and first knocks back on wine and listening for other spirits. She then manages a sensible, calm approach during her search. One thing leads her closer to another during this horror hopscotch, until she discovers the peculiar truth of why she received the coffin. 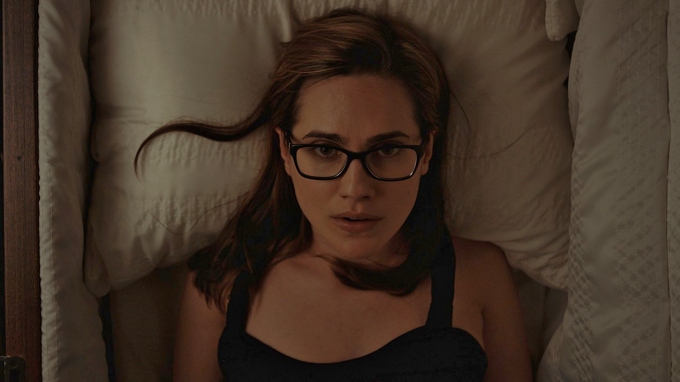 Actress-filmmaker Jennifer Prediger as Iris “tries out” the mysterious coffin

Part philosophical, part dark comedy and borderline absurd, Living Room Coffin certainly encourages you to contemplate life as to how none of us can avoid the inevitable last big sleep which fortunately comes much later rather than sooner for most of us.

Writer and first-time director, Michael Sarrow, laced his highly original story with a few “usual suspects” – many of which are red herrings, of course. His take on life and passing on becomes food for thought, relating it to some provoking life and death choices people make. Choices that may or may not be fully thought through, and then reneged on when one or more poor souls are involved ….

This film could have swerved off in many different directions; Sarrow chose to stick to solving the profound mystery clearly and simply. Geared up for resolution, Living Room Coffin inspires us to realize that some things, many things, like relationships, end eventually. What does one see in a cut flower? Remnants of beauty and time passing. All parts of a mystery that can astonishingly unfold bit by bit – should you ever find an elephant, or a coffin, in your living room.

Living Room Coffin can be viewed on the independent streaming site Fearless: Lorraine Dmitrovic, an author and artisan painter-jeweller and former journalist from Toronto, has written many entertainment related articles for magazines and newspapers 761
News
7 Streaming Networks You Need to Know About